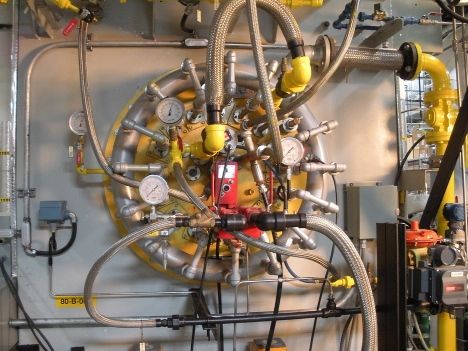 A combined heat and power (CHP) system, also known as a cogen, simultaneously creates heat and electricity from a single fuel source. CHP systems are highly efficient and cost-effective if the heat generated from power production is utilized on-site, as the use of on-site power reduces the loss of electricity through transmission. Overall efficiency can reach 80-85%, compared to the 35-40% electric efficiency in central power plants (including transmission and distribution). Other benefits of using CHP include increased reliability, reduced greenhouse gas emissions, and, if installed, backup capability to ensure continuous functionality during blackouts. Backup requirements include a battery powered startup system, a synchronous generator, and switchgear. With automatic/seamless backup controls installed, a CHP system can respond to a blackout in seconds.

A number of technologies can be utilized for CHP, including reciprocating engines (the cheapest), gas turbines, microturbines, and fuel cells (the most expensive). Regardless of the technology used, the upfront costs for CHP are high will only be a cost-effective investment if the heat generated is properly utilized. CHP is ideal for large commercial, institutional, and industrial buildings and can be used in some multifamily residential applications. CHP can be cost-effective, and payback periods range from 5.2 to 6.8 years. Payback period will be reduced, depending on annual power outage time.

Potential regulatory touchpoints in Boston and Massachusetts include:

CHP is eligible for a number of federal and Massachusetts incentives. Some of these incentives include:

A SAMPLE OF PROVIDERS