Opt for a Cool Roof 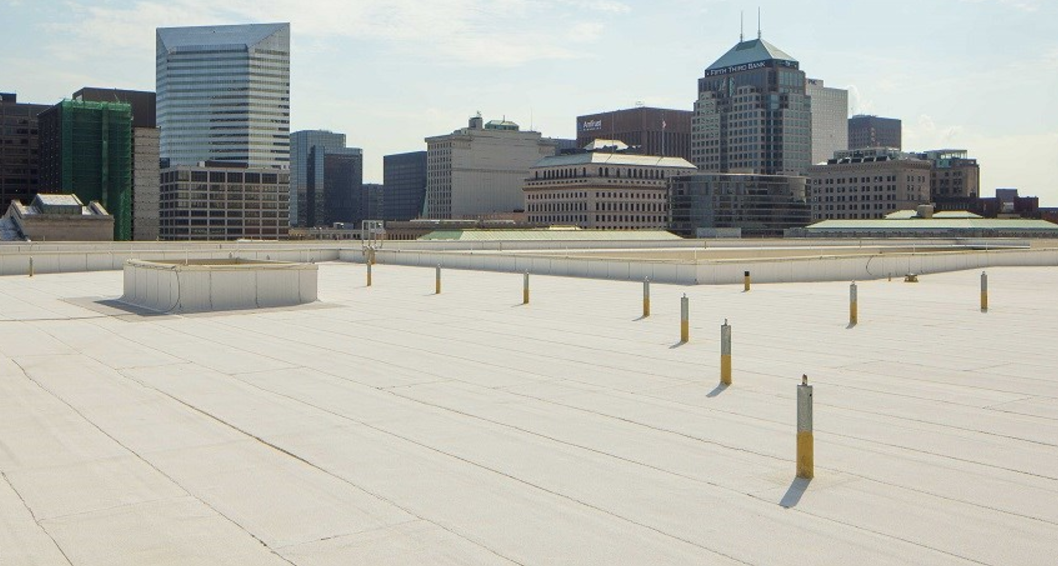 Cool roofs are constructed with highly reflective and emissive materials, usually in the form of membranes, coatings, and tiles. Cool roofing materials can have solar reflectance of over 65%, compared to 5-15% for traditional roofing materials. As a result, cool roofs tend to stay within 10-20⁰F of ambient air temperatures in the summer, while conventional roofs can be 55-85⁰F hotter than ambient air temperatures. A simulation of New York City found that use of cool roofing on 50% of available roof surfaces would reduce city-wide temperatures by 0.3⁰F.

Cool roofs are typically categorized as low slope or steep slope, which use different roofing materials. Low slope cool roofs are defined as having no more than a 2:12 pitch. Low slope cool roofs use single-ply membranes or cementitious and elastomeric coatings to increase solar reflectance and thermal emittance. Cool roof retrofits are often considered when existing roofs near the end of their service life. Cool roof coatings have typically been applied to existing roofs that only need moderate repairs, while membranes are often used for roofs needing more extensive repairs. Steep slope cool roofs typically use specially colored tiles with higher solar reflectance or metal roofing to reduce solar heat gain.

While cool roofs reduce cooling energy use in the summer, they can also reduce the amount of solar heat in the winter that could be used to warm the building. As a result, summer energy savings may be partially offset by increased heating costs. In most climates, this offset does not typically exceed the summer energy savings. Building owners should consult tools like the Oak Ridge National Laboratory’s Roof Savings Calculator to determine if cool roofing is a viable investment.

Potential regulatory touchpoints in Boston and Massachusetts include:

Note: Green and cool roofing are part of the City of Boston’s Climate Action Plan, and policies and programs to support cool roofing may appear in Boston in the near to medium term

A SAMPLE OF PROVIDERS