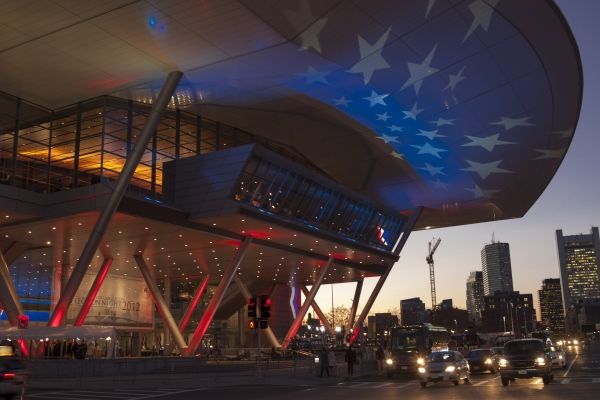 The South Boston Waterfront is the fastest growing urban area in the Commonwealth of Massachusetts. With 10 million square feet of development built between 2000 and 2013 and another 17 million square feet planned for the next two decades, innovation in transportation management strategies has become a necessity.

In 2014, the Massachusetts Convention Center Authority (MCCA) collaborated with MassDOT, the City of Boston, the Massachusetts Port Authority, and A Better City to create the South Boston Waterfront Sustainable Transportation Plan. One key finding was that an excessive number of private shuttles was being operated by employers in the Seaport, creating unnecessary traffic and pollution.

In July 2014, as reported in the Boston Globe, “as many as 34 buses circulated across the area at a given time, for a total of 74 shuttles a day, funded by 10 employers or property managers. Collectively, [employers spent] nearly $6 million a year to shepherd 1,100 to 1,300 workers to their destinations at peak times.”[1] The MCCA recognized this overflow of company-run shuttles in their vicinity and sought a solution to consolidate the traffic. A consolidated shuttle plan would result in a three-percentage-point reduction in company costs, traffic congestion, and carbon emissions.

As one of the larger stakeholders in the South Boston Waterfront, the MCCA felt they had a responsibility to help alleviate the problem of traffic congestion in the area. Shuttle consolidation had the multiple benefits of reducing traffic congestion and greenhouse gas emissions while also providing a great service to hundreds of employees.

The MCCA transportation staff was well prepared and trained, from experience with large conventions, to accommodate an increased passenger load. However, a major challenge to the MCCA’s implementation of the shuttle service was convincing companies that their shuttle service was as good as or better than the services offered by individual companies. Concerned about losing their personally-tailored service, companies struggled to come to an agreement on shuttle frequency and program costs. As of the spring of 2016, only one building, PricewaterhouseCoopers’ office at 101 Seaport Boulevard, was utilizing the service to transport employees.

Persistence has begun paying off. Two Fallon Co. buildings, 100 Northern Avenue and One Marina Park Drive, began using the MCCA-provided shuttle service during the summer of 2016. In early 2017, Vertex Pharmaceuticals began using the consolidated service, which now shuttles passengers from both North Station and South Station. Interest in the program has been expressed by Jamestown Properties and James Folk, MCCA Transportation Director, is working closely to bring John Hancock and Fidelity Investments on board.

The MCCA is currently managing the shuttle transportation for these four buildings using six buses contracted from Joseph’s Transportation. If these buildings still operated their own individual shuttle programs, they would require 18 buses.